Cirilia Rose, Designer and Author was the guest on the Yarn Thing podcast with Marly Bird.

(We kind of had a false start, you heard Tammy first, so if you listened live, we appreciate you hanging out until Marly was on the line! We are so glad Cirilia was able to reschedule after we missed our pre-arranged meet-up last week!)

Cirilia said she thinks she learned like the rest of us, at about age 7, from her grandmother. Her knitting was very tight, and squeaked on the needles. Picked up knitting again out of boredom in college, picked up the ‘Stitch n Bitch’ book by Debbie Stoller. She was looking for a specific yarn for a poncho and had been shopping at Joann’s and Michael’s but not finding it. She lived about 20 minutes from WEBS, so she says she got on a bus, and A WHOLE WORLD OPENED UP FOR HER!

She shared what she was studying advertising in school, and other ‘classes that might worry a parent’. Finding WEBS changed her whole direction, she began to work for them, Kathy Elkins put her to work eventually to work on the catalog to offer their Valley Yarns line. At first, she resisted designing because the constant need create something new can be intimidating. Cirilia says they are like the fairy god-parents that we need. With the connections that can be made in the yarn industry, Cirilia met Norah Gaughan, while she was at Berroco. Cirilia’s involvement with Berroco she equates as graduate school for yarn and appreciates the change in her path. Her face became known at that time because she was helpful at the photo shoots and putting booklets together.

As for her designing, during the period Cirilia designed Aidez which is a lovely cabled Aran styled. She finds a lot of people convert it from bottom up, individual pieces to top-down seemless and she says, ‘that’s cool, so did I!’ Really take a peek at this because she’s humble enough to show you her mistakes in this.

Cirilia is young enough that the next move was about a boy! She pursued a relationship that lead her to move to Seattle so she approached Skacel, who were looking for help with their HiKoo yarns. Cirilia was again more helpful to them than originally thought, Cirilia got to help with Fiber Factor! You may remember seeing her there. 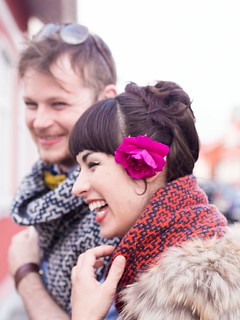 Then she made a friend in Stephen West, and went to Amsterdam. They collaborated on a collection of designs. This picture is for her design Harpa but it’s clear they are designers who are close enough to support each other ans work well together.

Magpies, Homebodies and Nomads: A Modern Knitter’s Guide to Exploring and Discovering Style truly showcases the moods and loves of a knitter, or in this case, Cirilia as a designer. It took her three years to complete because, sometimes life gets in the way, and she says while that was going on her style changed. It includes 26 patterns that are unique to each other and really demonstrates her versatility and love of style. Marly and Cirilia discussed the patterns Loro Vest, which she hopes will become the new cowl in fashion in that it’s a little more yarn, work and is just as flexible in fashion. Jordaan Cape she says was inspired by Stephen West and his love of shopping and finding inspiration. Frambois Cardigan uses buttons to attach scarves and instantly changes a look. The photography is by Jared Flood another Yarn Industry Name, of Brooklyn Tweed, who’s just announced he’s moving back to Portland, OR, which Cirilia is just tickled about.

Cirilia is now designing with Zealana in promoting their possum yarn, from New Zealand, to promote their brand in the US. This is not what we in the US might imagine, the yarn is super-soft luxury fiber, very warm. Not only is she designing with this yarn, she’s also putting together a magazine!

Her website is www.ciriliarose.com, can be found in Pinterest, Instagram, Facebook and a newsletter. One thing that is really interesting is that she is putting together videos similar to the ‘Julie/Julia’ blog, in the Ria + June about ‘Principles of Knitting’.

If you missed getting to hear this live you can still hear it archived: https://www.blogtalkradio.com/yarnthing/2015/04/09/cirilia-rose-designer-and-author or in iTunes

Previous Post: « Vicki Twigg, Author of the Twigg Stitch
Next Post: How to Crochet: The Yo Yo Scarf »