The Incomparable Nicky Epstein was the guest today on the Yarn Thing Podcast with Marly Bird. We are all so thrilled, even Marly’s MOM was thrilled, she calls her books ‘My Nickys’, even though she’s not a yarnie. Isn’t that cute?

Nicky has been in the knitwear industry for a good long time. She learned to knit and crochet from her mother and grandmother, and a neighbor that needed to learn the language also helped her knitting skills in trade.

Her design career began with a contest with McCalls Needlecraft contest in 1982. At the time, she was doing wardrobe styling in the desert, she made them stop at a yarn store so she could get the materials. She was determined to win THIRD place, because she wanted to win the set of needles, that were hard for her to find. Margaret Gilman had to CONVINCE her to be the first place winner and BUY the needles with her winnings. They later asked her for a design for which she had to whip something up (literally, because it took her a week) and she always gave her work away.

Her work attracted the notice of other knitwear design publications, they loved her colorwork and that was all they wanted her to do, even though she loved cables and lace… Even designing was a learning experience as she was a fine arts graduate, and all they needed was a stick figure and the pattern written out. It also has to fit the magazine’s 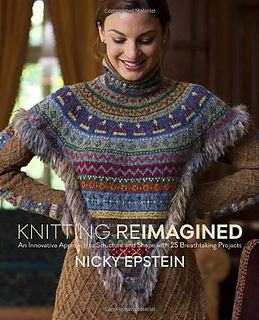 format and they would size it. It was incomprehensible for her that SHE was working out a sweater in just days but she always came through.

Nicky feels that she has had to reinvent herself, working up new edgings and other unique pieces. She wrote a book of hats, (now out of print) that sold 10,000 copies in the first six months. She is currently working to update her embellishment book, that she now has the rights back to and hopes to offer it again. The next book is her 29th! Coming out in the fall, Enchanted Knits (no links to that yet…) Knitting Reimagined is along those lines of making old things new again.

Nicky, while telling this story of knitting as a kid, shared that she knit for her dolls. At some point in her designer brain, she communicated with Matel that knitting for Barbie is a skill that will fade away if something is not done and they allowed her to create the Knits for Barbie books, (there’s a crochet version too!) and since then has moved into the 18″ dolls. 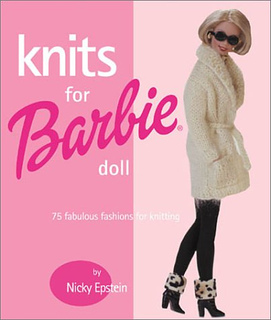 Marly asked how she does it, how does she stay relevant? Nicky continues to put together unique publications on Edges, Circles, Blocks… some have been obviously inspired of all the travel she does, like Knitting on Top of the World (she says is her favorite) and Knitting in Tuscany. She hates ripping out things that are mistakes, and she says her design for Vest Bets contributions she calls a Mistake, it’s a beautiful vest featuring large cables; Dance Smartly was orignally of failed sleeves!

She will be teaching the blocks at Stitches South, which she said she uses paper towels to help her. Speaking of Stitches South, Nicky Epstein be the Opening Day speaker and sharing her Reimagined Knitting work.

Nicky travels to teach as often someone includes the words SPA or CRUISE, she admits. You can follow her schedule at her website but if you can’t follow her to the ends of the earth in person, she does share her adventures in Facebook, Twitter and Instagram. She will be at TNNA in the Vogue Knitting booth so if your local yarn store owner is going, you may want to send them to see her!

In fact, Marly’s Mom will probably get to see the SOURCE of her Nickys there! I wonder if she will be as squealy as me…

If you missed hearing this LIVE it is still available at this link as an archive: https://www.blogtalkradio.com/yarnthing/2015/04/14/the-incomparable-nicky-epstein or in iTunes.