Shibaguyz, Shannon and Jason Mullett-Bowlsby,  were the guests on the Yarn Thing podcast with Marly Bird today. 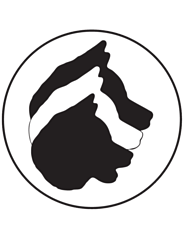 ‘Shiba’ as in they have THREE Shiba Inu, so with Marly’s dogs we could have come canine contributions here too!

The name ‘Shibaguyz Designz’ actually came from their dogs, when they visit neighborhood markets with their 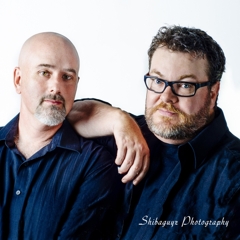 dogs, three Shiba Inus, that attract a lot of attention and became known locally as the ‘guys with the Shiba Inus’. Their background includes ballroom dance (and some tap) on Shannon’s part, for 20 years danced professionally, competition and also taught. About five years ago, he walked away from that to get started designing, meeting with Drew Emborsky and Leisure Arts at their first TNNA. He’d studied palentology in college, but they had both learned to sew as kids, taught by mom’s. Jason’s dad dabbled in photography, and he liked photographing their designs and swatches and grew in his skills with the camera and graphic design from there. They found there was not a lot of formal training for what they wanted to do. Shannon says that he and Jason found most of their success was in beating the pavement and making contacts. He says if it wasn’t for professionals being open with what they had done, they wouldn’t have known what to do. Jason’s walking away from corporate JOB to be full-time Shibaguyz Designs was a little more traumatic, like ripping a bandage but sounds like he was ready.

Their new book Designer Crochet: 32 patterns to Elevate your Style, Sizes Small to 5X. This is their seventh book (and another is on the way), you really need to take a look at their design listings in Ravelry.

They’ve also started a Technique Tuesday, to help us perfect our stitches AND our photography! That can be found in posts on their Facebook page and their website. The Shibaguyz really believe in the community that’s formed around their work and are still getting a thrill from seeing their book on a shelf in a store. For them it’s been a great adventure.

Their website:  https://shibaguyzdesignz.com/ includes three primary factors of their lives, their designs, their photography and their favorite cooking ideas.

If you missed today’s episode when it was LIVE you can still hear it as an archived episode: https://www.blogtalkradio.com/yarnthing/2015/04/28/shibaguyz-shannon-and-jason-mullett-bowlsby