Kathy Merricks Babbette Blanket is what she’s most known for, appeared in Interweave Crochet 2006

Kathy Merrick, Crochet and Color Expert was the guest today on the Yarn Thing with Marly Bird podcast. Most people know her for the Babbette Blanket that appeared in Interweave Crochet 2006 and obviously she is known for use of COLOR!

Kathy began in yarn as a knitter, her grandmother was a knitter and a crocheter, but she learned to crochet from a book. She is especially inspirational as she is LEFT-handed or EXTREMELY left-handed as she says and she finds that everyday she has to admit things to work for her. Liza Prior-Lucy who worked with Kaffe Fasset on the quilting books. When Trisha Malcolm of Vogue knitting was creating the Knitting-on-the-Go books, and Liza volunteered Kathy to send in hats.

She spent time working near Kaffe Fasset, who tickled her one day by asking HER opinion on what he was working on. Can you imagine, KAFFE FASSET asking YOU about color?

Another wonderful Kathy Merrick design that has been overwhelmingly popular is the Boteh Scarf. Click that link, over 1,000 people have made it, according to Ravelry.

She made the cover of VOGUEKnitting Crochet which was a special edition that sold out quickly. 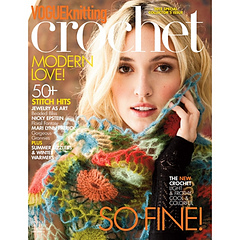 She spent sometime explaining how she plays with color.  Which makes sense we she  spoke of her book, Crochet in Color from Interweave,  with Kim Werker editing. Her favorite project was the Tiny Motif Sweater in that book.

She’s also been fortunate enough to work with Koigu with their pattern books. In fact that Babbette Blanket was made of Koigu yarns. She is excited about a product they are working on and recommends following them on Facebook.