Diana Gabaldon joined Marly on the podcast to share what it has been like writing the 8 books in the Outlander series (7 published and one to come in March 2014), along with the excitement regarding the tv series based on the first book that Starz is producing and is expected to hit the cable airways in 2014.

The show began with the big SPOILER ALERT disclaimer so that all of the listeners knew Marly and Diana were going to talk about all things Outlander and nothing was going to be left out of the discussion. For me, that made the interview that much better because Marly was able to ask about specific scenes without having to tip toe around the topic.

Here is an excerpt from Diana’s bio on her wonderful website https://www.dianagabaldon.com/ :

“Diana Gabaldon is the author of the award-winning, #1 NYT-bestselling OUTLANDER novels, described by Salon magazine as “the smartest historical sci-fi adventure-romance story ever written by a science Ph.D. with a background in scripting “Scrooge McDuck” comics.”

The adventure began in 1991 with the classic OUTLANDER (“historical fiction with a Moebius twist”), has continued through six more New York Times-bestselling novels— DRAGONFLY IN AMBER, VOYAGER, DRUMS OF AUTUMN, THE FIERY CROSS, A BREATH OF SNOW AND ASHES, and AN ECHO IN THE BONE, with more than twenty million copies in print worldwide.” 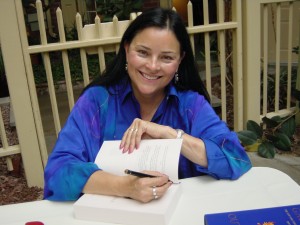 So what’s in store if you give the podcast a listen?  You will find out the answers to the following:

Join Marly and Diana as they talk about why Jamie and Claire have entranced so many readers for the past 22 years, and why the idea of “What makes people stay married for 50 years” has had such an impact on the development of the series.

*Giveaway* – leave a comment here with Diana’s secret word, and you could win a booklet containing the first 7 chapters of My Own Heart’s Blood.  Winner will be chosen the week of Oct. 14th!

No podcast week of Oct. 6th as Marly is traveling to Detroit to film the next season of the Knit and Crochet Now TV show!