Jessie at Home, Designer & Blogger Jessie Rayot was the guest today on the Yarn Thing podcast with Marly Bird. This is part of the continuing series of Jessie was taught to crochet by her great-grandmother when she was 9. Great-grandma was a perfectionist and pulled out Jessie’s work when it was wrong, much to the consternation of other adults in her world. She says now, that when she has to rip something out, she’s not afraid of it and would prefer to get it right than finish it and never use it because it was wrong.

As an adult she went to DePaul University for the theater department and was the Costume Designer department head at Adelphi University, then moved New Jersey when she married her husband Doug, became mother to twin daughters. Her blog, Jessie at Home, was a way to keep family far away apprised of everything going on at her house. ‘Yarny stuff’ became the priority of the blog eventually. She was also told it would be smart for her to attend the CGOA and to enter something for the contest. Without having any idea what to submit, it was suggested that she enter something already finished so she put in an afghan that she had finished and was ‘loved’ — as in, taken everywhere she went, made into blanket forts… And that afghan got her 2nd place! With it came recognition, offers of mentors, design and publishing opportunities. 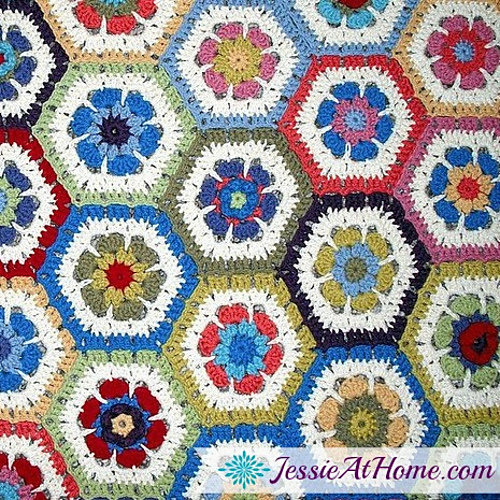 Jessie and Marly really believe in the power of attending these events as far as putting a face to a name to designs. The progress Jessie made toward being published by Red Heart Yarns, and the Crochet! magazine (the Octie Throw). Sometimes Jessie will create something that nobody will purchase so she will put it on her blog and make money that way from it, and sometimes they will as her for something with with a theme and she will create something with those ideas and it will be a successful that way.

Jessie feels with her patterns she has three options, selling to someone else and let them publish, publish it and sell it herself or to offer it for free herself; she considers with each design whether to design for her blog with the advertising on the page or by submitting to a magazine. For Jessie, she makes the choice based on the pattern. Fortunately she’s got the freedom to do that, but it really depends on the support she receives from her followers.

Jessie at Home is a website you can find here, she can also be found in Facebook and in Ravelry.

If you missed getting to hear this LIVE, it’s available as an archive at: https://www.blogtalkradio.com/yarnthing/2015/05/05/jessie-at-home-designer-blogger and at iTunes.