Author Kari Chapin was the guest on this Happy Tuesday episode of Yarn Thing podcast with Marly Bird. Marly had seen her book ‘Handmade 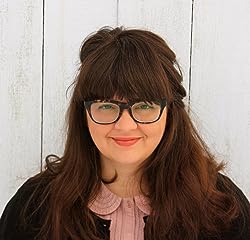 Marketplace in the bookstore and feel in love with it, wrote her herself to be on the program.

Kari Chapin told us in her background story that she lived in Denver, Marly’s neck of the woods, and remembers a bookstore she loved and being especially excited to go back and see her book in it’s shelves. Growing up, Kari actually split her time between two sets of parents, her one set who were very entrepreneurial and bohemian and the other traditional. She realizes she identifies with the one side more. She learned a few stitches of crochet in grade school to make Easter Baskets and that began her knowing that creating things by hand became her passion. She still crochets, embroidery, pottery, needle felting and of course writing.  When she fell in love with needle felting, she was inspired to write Feltlicious with Kerri Wessel, published in 2013. She has also worked with creating collages and work with her art background. She admits she wanted to be involved in the arts by way of promoting them, but not by being in the limelite. She says it was more important to her that artists be properly supported (or paid) and in promoting them.

Kari met a woman who recycled wool sweaters and create stuffed animals beginning in the late 1970’s, Crispina, author of the Sweater Chop Shop, and learned about her creatures called ragamuffins. Kari actually was asked to write an ariticle about her. Kari spent at a lot of time with the local retail store manager and at one point that person offered Kari her own job which also required that she be the buyer for the store, which Kari did, leaving her career as publicist and marketing.  Etsy became popular at about that time and she looked there for products for the store, also traveling to New York and other places to search for items at craft fairs. This was difficult work because the she and the goods producers didn’t seem to be communicating the same language, so Kari began coaching them with printed materials that educated the producers about how to sell their items by wholesale, and she began to be approached by those needing advice about how to work with other markets.

The owner of the store (who wasn’t Crispina) decided she was done with homegoods, so Kari was about to be out of a job. During the closing out of the store, she met an editor from Story Publishing and she approached with an idea. That began her writing career with ‘Handmade Marketplace‘ using those materials she’d been sending to those she’d been doing business with.

The book is divided into three sections (Getting to Know Yourself and Your Business, Spreading the Word — and Images (Marketing), Getting Down to Selling) and includes the experiences and advice from those that have forged their way, in her Creative Collective.  Not just in fiber crafts, either, which is important to remember.  Sara Delaney is her cousin and is featured in Kari’s Creative Collective. among many others of many different crafts.

Kari also hosts a podcast! AIM, which stands for Action, Inspiration and Mindset, is Kari’s way of gathering information from successful handcraft businesses for herself and sharing that with the rest of us. This is a new project, just begun in November, so it will be easy for us to catch up.

If you missed getting to hear this episode LIVE, it is still available at the original air location as an archive: https://www.blogtalkradio.com/yarnthing/2015/04/21/author-kari-chapin or in iTunes.