Teaching beginner knitting at my local yarn shop was something that I enjoyed for 4 years. It is only because of my new travel schedule and my work load that I gave it up.  But there isn’t a Monday or Wednesday night that goes by when I don’t miss it.  Seeing the light bulb flicker on in the eyes of the students as they became knitters never-got-old. 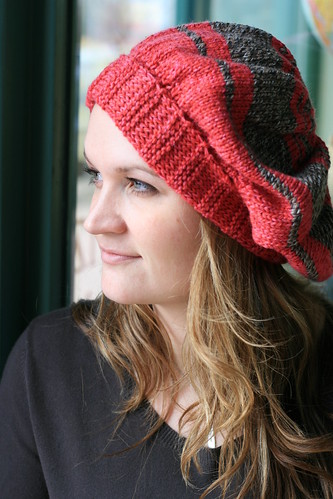 When I first started teaching I didn’t have a project for the class that really worked.  So, I set out to design something that really encompassed everything that the students learned in class.  The first has was the Gerri Hat, named after the yarn shop owner and my friend.  I used that hat for a year and a half.  Then, I decided that I needed a new hat.

So, I wound up some Cascade 220 wool and began.  I didn’t really have a plan.  However, I figured if I made a band (knit flat) for the head the length could be adjusted pretty easily so a new knitter would be guaranteed that it would fit around his/her head.   Then, by picking up stitches along the edge of the band and joining to knitting in the round would help with the problem of twisted cast-on’s.  Also, it would make it pretty easy to learn how to knit in the round without having to begin at the very beginning.  After it was all said and done I designed the Ratatouille Hat.

Now, why was it named Ratatouille?  When I finished the hat I put it on my head and asked my kids what they thought.  Immediately my son’s and daughter exclaimed, “Mommy! You look like Ratatouille!”  In actuality, I looked like Remy the rat from Ratatouille but I understood what they meant.

From that day on I called the hat Ratatouille and the name stuck. And the hat was a hit! For the rest of the time I taught at Knit Knack I had beginner knitters graduate my class with a Ratatouille of their own.

As I mentioned in the post about STITCHES West, I put an offer out there to the PJ Party participants to knit the Ratatouille hat so we all looked alike at the PJ Party. It was well received.  After the PJ Party many of the knitters gave the hat they made (in some cases several hats) to the wonderful organization Halo’s of Hope.

Anyway, after having people make the Ratatouille hat for both STITCHES West and South I finally got around to designing a crochet version of the hat.

Say hello to Sous Chef.  I figured it was the perfect name since it was second in line to the head chef (no pun intended).

This hat is constructed the same way its predecessor only instead of using two needles you use a HOOK!

YAY!  This hat is very customizable.  If you lengthen or shorten the brim to fit your head that is awesome…but make sure you pick up and crochet a multiple of 8 sts along the brim to make the decreases work.  Having said that, you do know that if you change numbers to begin with the final stitch counts at the end of each row will change but I figure if you are good enough to alter the pattern you are good enough to know that 🙂

I have a special deal for you! From now until the end of October 2012, if you use the coupon code “pjparty” at the Ravelry Checkout you will get 50% off this pattern!  What a deal right?

Now, go and favorite it on Ravelry and tell all your friends!